Theft is a serious problem for road hauliers and represents an estimated annual loss of almost €8 billion in Europe. REPSOL Security Parking is carrying out a trial project which could help tackle this phenomenon.

In Spain, the oil company, REPSOL, has a network of more than 3,500 service stations. REPSOL Security Parking has a network of secure lorry parks located in the service areas of the country’s main motorways. All of these lorry parks, each of which has about 100 spaces, are equipped with the same security installations and procedures:

Indigo Spain is REPSOL’s chosen partner for this innovative project in which we are responsible for designing the lorry parks’ management and operating equipment, supplying, assembling and commissioning management system equipment, maintaining and cleaning the facilities, and managing the lorry parks, both on an operational as well as an administrative level.

As the lorry parks are located outside of urban areas, Indigo Spain has designed and developed a remote-management system which allows the lorry parks to be operated entirely at a distance 24 hours a day. The operation is run from the National Centre for Remote Operations and Assistance (CNTO) by a trained team of bilingual teleoperators who deal with any incident that arises in the lorry parks. A video interphone system personalises contact with users.

To improve security, the access control system applies not only to vehicles but also to pedestrians. A credit or debit card, a SOLRED card or even the ‘Via-T’ toll system badge may be used to pay for the stopover.

Furthermore, our business model represents added value for REPSOL in terms of the service’s administration as we provide the client with detailed economic, technical and operational reports.

Remote operation and the Connecpark™ service

Based in our National Remote Operation and Assistance Centres, our team can offer help whenever needed, supporting the user’s journey through the car park thanks to an optimised remote operation system, available 24/7. 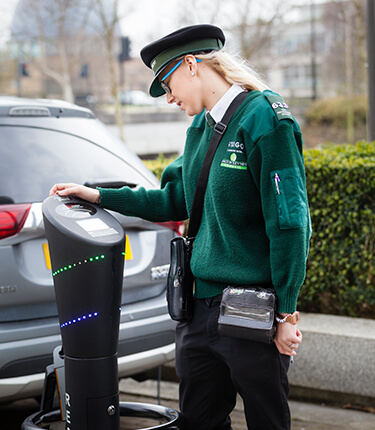 Proven experience in inspections and penalties

With twenty years of experience in parking inspections and collections in the United Kingdom, Belgium and Spain, we can take over all or part of the management process, adapting our approach to each town’s policies and budget.

On-street parking is a key element of urban management and local policy. As recognised experts in France and internationally, we can act as an important partner for local authorities as they develop their urban mobility solutions and smart-cities.