Indigo is a partner for the 38th edition of Le Livre sur la Place event, hosted by the City of Nancy from 9 to 11 September 2016. For this occasion, Indigo is organising a breakfast book signing event for subscribers and partners at the Charles III car park mobility centre (Place Charles III – 54000 Nancy). 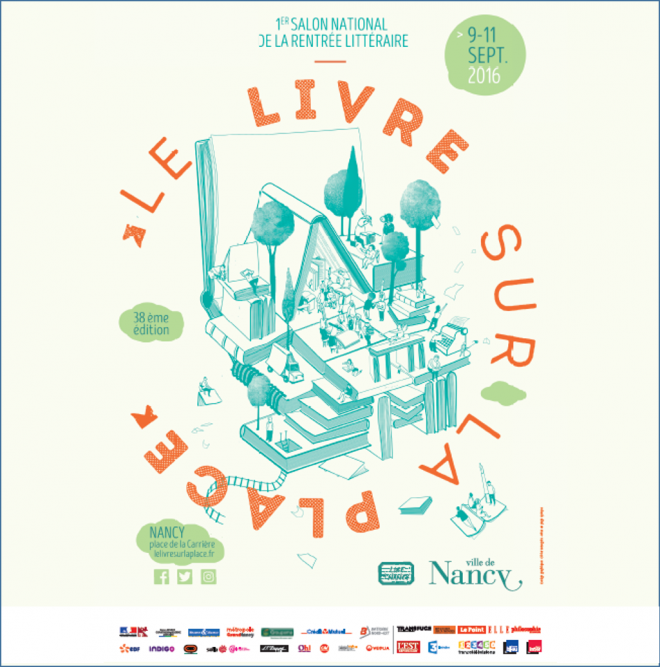 Having hosted David Foenkinos in 2014 for his novel ‘Charlotte ’, and Daniel Picouly in 2015 with ‘Le cri muet de l’iguane ’ , to mark this new autumn literary season, Indigo is pleased to welcome Serge Joncour for his novel published by Flammarion, ‘Repose-toi sur moi ’
and invites you to a book signing to be held on:

Born on 28 November 1961, Serge Joncour’s childhood was spent in Paris, Nièvre, Eure-et-Loir and Valais in Switzerland. He initially studied philosophy while wanting to be a combat diver.

Serge Joncour had a variety of jobs before he began writing professionally (advertising, swimming coach). His first novel, Vu, was published in 1998 by Dilettante. He was awarded the Prix France Télévisions in 2003 for U.V. (adapted for the screen in 2007 with the same title U.V.).

In 2005, he received the Prix de l’Humour noir Xavier Forneret for his novel L’Idole.

He wrote the screenplay for the film Elle s’appelait Sarah, adapted from the French novel of the same name by Tatiana de Rosnay, starring Kristin Scott Thomas, which came out in the second half of 2010 in cinemas in France, Benelux, Spain and Australia. Released in the United States in July 2011, it was the highest grossing foreign film at the Box-office that year, and it is the fifth most successful French film of all time in the United States.

Along with Jacques Jouet, Hervé Le Tellier, Gérard Mordillat and a host of other artists and writers, he appears on the radio programme Des Papous dans la tête on France Culture.

His novel L’Idole was adapted for the cinema in August 2012 by Xavier Giannoli. The film, entitled Superstar, stars Kad Merad and Cécile de France. The film is about a man who becomes famous for no apparent reason. It featured in official competition at the Mostra de Venise 2012.

Serge Joncour received the Prix des Deux Magots 2015 for L’Écrivain national. With an atmosphere redolent of the films of Claude Chabrol, Serge Joncour spins an extremely tense tale: a few weeks of tranquillity at a writing retreat slowly but surely descend into a troubling journey through our contemporary fears.

In this beautiful novel, infinitely delicate and sensitive, Serge Joncour explores the fragility and vulnerability of human beings. Also the notion of relying on someone else, of trusting another. With a great deal of subtlety, the author creates a network of oppositions, the city in all its modernity set against the countryside and its traditions, wealth and poverty, male and female, strength and fragility. But these oppositions are not steadfast, they are fluid and constantly re establishing themselves. Above all, they should not be seen as barriers. What brings people together is more powerful than what separates them. The characters of Aurore and Ludovic are highly complex, and they both lead us to ask serious questions about our own lives.

A love story, but much more than that, ‘ Repose-toi sur moi ’ is an important novel that examines the world around us and our choices, one that will resonate for a long time to come !